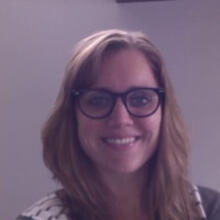 Beth Derderian is a Postdoctoral Associate at the Council on Middle East Studies in the MacMillan Center for International and Area Studies. Dr. Derderian received her doctorate in anthropology from Northwestern University.

Focusing on the development of the Louvre Abu Dhabi in the United Arab Emirates, her research explores the emerging ways that state actors draw on art and museums in highly transnational contexts, and on the inequities of representation and practice in a global contemporary art world. Tentatively titled “Displaying culture: the politics of contemporary art and liberalism in the UAE,” her manuscript draws on two years of ethnographic fieldwork in the United Arab Emirates (UAE). She was awarded a Fulbright IIE and a doctoral research grant from the Al Qasimi Foundation to conduct her field research. Her next project, on touring exhibitions of Gulf-based artists as modes of cultural diplomacy, particularly given increased focus on Gulf regimes’ human rights records and criticism of the ongoing war in Yemen.

She currently serves as a contributing editor for the Society for Cultural Anthropology’s AnthroPod podcast, and co-editor of the Middle East Section News on Anthropology News. In fall of 2020, she will join the College of Wooster as an assistant professor of museum studies and anthropology.

Dr. Derderian also holds a Master’s degree in Museum Studies and Near Eastern Studies from New York University. Prior to graduate school, she worked for the University of Southern California and the Getty. She is teaching “Peoples and Cultures of the Arabian Peninsula” in fall 2019, a course focusing on the culture and peoples of the Arab Gulf. The course offers a brief historical overview of the region before analyzing topics such as migration, education, gender and social reproduction, space and urbanization, the environment, and art and culture.

2017    “Authenticating an Emirati Art World: Claims of Tabula Rasa and Cultural Appropriation in the UAE.” Journal of Arabian Studies 7(1)12-27.

2016    “Critique as Infrastructure: Organic Growth and the Rise of Visual Arts Organizations in