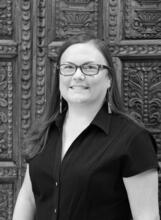 Kelly Fayard (Poarch Band of Creek Indians) is an assistant dean of Yale College and Director of the Native American Cultural Center at Yale, and the Director of the Peer Liaison program.  She earned her BA in cultural anthropology and religion from Duke University, and a certificate in museum studies as well as her M.A. and Ph.D. in anthropology from the University of Michigan. Before her current position, she was assistant professor of anthropology in the Sociology and Anthropology Department at Bowdoin College.  She held the Anne Ray fellowship at the School for Advanced Research in Santa Fe, NM in 2014-2015.  She is currently a member of the Native American and Indigenous Studies Association, the Society for Applied Anthropology, and is on the Indigenous Education Board of Directors, the distributer for the Cobell Scholarship Fund.

Her research deals primarily with the Poarch Band of Creek Indians in southern Alabama, where she is an enrolled member.  Her research investigates what it means to identify as a Poarch Band of Creek Indians, a federally recognized tribe in the state of Alabama. This research examines the methods and actions the Poarch Creek use to define themselves as Creek, given the stereotypes and assumptions about what it means to claim an Indian identity. The project investigates how race and blood quantum frames Indian identity and relatedness in racial categories and directly contrasts the ways that identity is negotiated by the Poarch Creek themselves; how religion serves as a method for Poarch Creeks to express their Indian identity, whether that be through reclaiming the practice of stomp dance religion or by attending church services on the reservation or where the majority of the participants are native; how social cohesion is promoted through everyday practices (homecomings, family dinners, working together) as well as special occasions (annual pow wow, the annual “Celebration of Survival,” weddings, and funerals) and adds to an individual’s sense of Indianness; and how the public relations campaign for the tribe has been a necessary component of the tribe’s economic and business success.