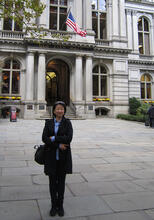 I am interested in the interaction between human physical condition and social complexity in China, mainly from Late Paleolithic to Middle Neolithic period, based on the Bioarchaeological analysis of human remains. In specific, the dietary structure, nutrition and health condition of ancient people which might indicate the difference among status or genders; activity pattern and work load which might help us better understand the cultural dissemination, and formation of the multiple central authorities in early China.