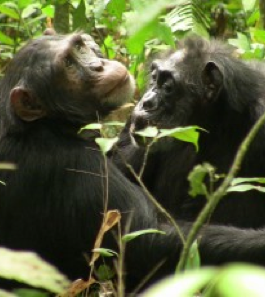 Primates and other mammals show measurable, heritable variation in behavioral traits such as gregariousness, timidity, and aggression. Connections among behavior, environment, neuroanatomy, and genetics are complex, but small genetic differences can have large effects on behavioral phenotypes. One of the best examples of a single gene with large effects on natural variation in social behavior is AVPR1A, which codes for a receptor of the peptide hormone arginine vasopressin. Work on rodents shows a likely causal association between AVPR1A regulatory polymorphisms and social behavior. Chimpanzees also show variation in the AVPR1A regulatory region, with some individuals lacking a ca. 350-bp segment corresponding to a putative functional element. Thus, chimpanzees have a “short” allele (segment deletion) and a “long” allele (no deletion) at this locus. Here we compare AVPR1A variation in two chimpanzee populations, and we examine behavioral and hormonal data in relation to AVPR1A genotypes. We genotyped AVPR1A in a captive population of western chimpanzees (Pan troglodytes verus, New Iberia Research Center; N = 64) for which we had quantitative measures of personality (based on 15 behavioral style indices, calculated from 3 yr of observational data), dominance rank, and baseline testosterone levels. We also provide the first assessment of AVPR1A genotype frequencies in a wild eastern chimpanzee population (Pan troglodytes schweinfurthii, Ngogo community, Kibale National Park, Uganda; N = 26). Our results indicated that the AVPR1A long allele was associated with a “smart” social personality in captive western chimpanzees, independent of testosterone levels. Although the frequency of the long allele was relatively low in captive western chimpanzees (0.23), it was the major allele in wild eastern chimpanzees (0.62). Our finding that allele and genotype frequencies for the AVPR1A polymorphism differ among chimpanzee populations also highlights the need for comparative studies —across subspecies and research sites— in primate behavioral genetics.

The complete article is published in a recent edition of the International Journal of Primatology.