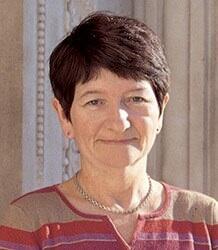 Professor Dame Alison Richard received her undergraduate degree in Anthropology at Cambridge University, and her doctorate from London University.  In 1972, she joined the faculty of Yale University, where she became Professor of Anthropology in 1986, chairing the Department of Anthropology from 1986 to 1990, and later serving as Director of the Yale Peabody Museum of Natural History, where she oversaw one of the most important university natural history collections in the USA.  From 1994-2002, she served as Provost of Yale, with operational responsibility for the University’s financial and academic programs and planning.  In 1998 she was named the Franklin Muzzy Crosby Professor of the Human Environment.

From 2003-2010, Professor Richard was Vice Chancellor of the University of Cambridge, a position carrying the responsibilities of university president.  During her tenure, she led several major changes in university policy, reorganized management of the University’s endowment, expanded Cambridge’s global partnerships, and launched and completed a billion pound fund-raising campaign.  Her achievements received recognition in 2010, when she was awarded a DBE (Dame Commander of the British Empire) for her services to Higher Education.

As a researcher, Professor Richard is widely known for her work and writings on the evolution of complex social systems among primates. This work has taken her to Central America, Northern Pakistan and, in particular, to the forests of Madagascar. Professor Richard has been working in Madagascar since 1970, when she spent 18 months studying the socioecology of sifaka, Propithecus verreauxi, for her PhD.  Since 1984, in collaboration with colleagues in Madagascar and the US, her research has focused on the demography and social behavior of the sifaka population at Bezà Mahafaly, Madagascar.   In 1975, with colleagues from the University of Antananarivo and Washington University, she launched the Bezà Mahafaly partnership for conservation, research and training, and she has been deeply involved in that activity ever since.

Professor Richard is a trustee of the Howard Hughes Medical Institute, and the Liz Claiborne & Art Ortenberg Foundation.  She chairs the Advisory Board of the Cambridge Conservation Initiative and the Leadership Council of the Yale Peabody Museum of Natural History, and serves on the Advisory Board of Arcadia.  She has received numerous honorary doctorates, and in 2005 she was appointed Officier de l’Ordre National in Madagascar.

Richard, AF. 2022. The Sloth Lemur’s Song: Madagascar from the Deep Past to the Uncertain Present. University of Chicago Press.

Richard, AF. 2022. The Sloth Lemur’s Song: Madagascar from the Deep Past to the Uncertain Present. University of Chicago Press.