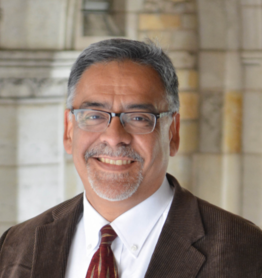 Richard G. Bribiescas is the J. Clayton Stephenson/Class of 1954 Professor of Anthropology, former anthropology department chair, and former Vice Provost for Faculty Development and Diversity. He holds a secondard appointent in the Department of Ecology and Evolutionary Biology and is a Primary Investigator in the Yale Reproductive Ecology Laboratory. His most notable research involves the evolutionary biology and endocrinology of human and comparative life histories, reproduction, aging, and metabolism. He has conducted field research among the Ache people of Paraguay as well as populations in Venezuela, Japan, Ecuador, and the United States as well as various species of non-human primates.

Bribiescas received his B.A. in Anthropology and Psychology (double major) from the University of California, Los Angeles, afterwards earning an A.M. and Ph.D. in Anthropology from Harvard University. Prior to his position at Yale, he was a Post-Doctoral Research Fellow in the Reproductive Endocrine Unit of Massachusetts General Hospital in Boston.

He is the author of two books; Men: Evolutionary and Life History (Harvard University Press, 2006), a comprehensive examination of the evolutionary biology of human males which was awarded the 2007 Bronze Medal in the category of science by the Independent Book Publishers Association and How Men Age: What Evolution Reveals about Male Health and Mortality (Princeton University Press, 2016), winner of the W.W. Howells Prize for best book in biological anthropology by the American Anthropological Association.

Professor Bribiescas serves on the editorial board of the American Journal of Human Biology and is also Associate Editor for the journal Evolution, Medicine, and Public Health.  Google Scholar list can be found here.