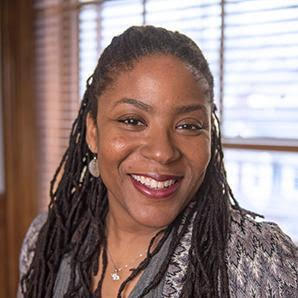 Riché J. Daniel Barnes, Ph.D. received her B.A. in Political Science from Spelman College, her M.S. in Urban Studies from the Andrew Young School of Policy Studies at Georgia State University and her M.A. and Ph.D. in Cultural Anthropology with a certificate in Women’s, Gender, and Sexuality Studies from Emory University. Dr. Barnes is a socio-cultural anthropologist whose research to date has focused on a broad range of issues concerning Black families throughout the African Diaspora (broadly defined), schools, communities, and cities; Black women’s roles as mothers; and gender as it pertains to marriage, career, and motherhood. Her research has appeared in numerous scholarly collections, including The Changing Landscape of Work and Family in the American Middle Class and The Gender, Culture, and Power Reader. Her book, Raising the Race: Black Career Women Redefine Marriage, Motherhood and Community (Rutgers Press 2016), was nominated for an NAACP award and namedwinner of the 2017 Distinguished Book Award for the Race, Gender, and Class Section of the American Sociological Association. A scholar who has received numerous awards and fellowships, Dr. Barnes is currently working on two projects that expand her research on Black motherhood: Investigating the impact of race, class, and gender on health disparities and strategies for educating and enculturating Black children. Additionally, she has published essays on how Black women navigate career and family, the role of the Black middle class, contesting the image of the “Strong Black Woman” and the neo-politics of respectability, race, class, gender and family policy, and representations and constructions of blackness within the Black community. Dr. Barnes served the Dean of Pierson College at Yale University. Prior to her role at Yale, Dr. Barnes taught at Smith College and was Assistant Dean of Social Sciences and Associate Professor of Anthropology at Endicott College.